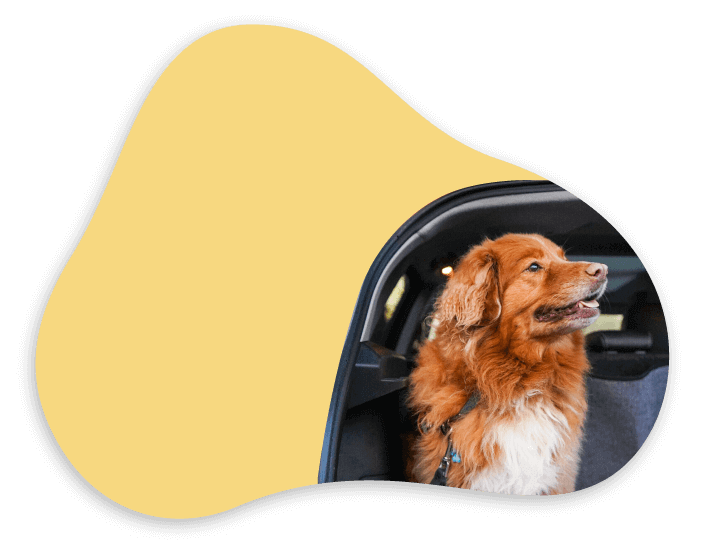 THE
BEST CARE
FOR YOUR
BEST FRIEND 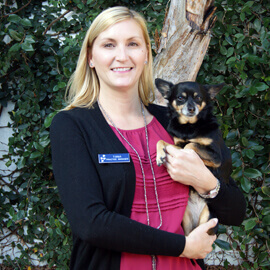 Practice Manager
Tania joined the Bay Animal Hospital team in June 2015. Born and raised in the Midwest, she grew up with a great love and compassion for animals. After attending the University of Arizona and studying Animal Sciences, Tania enjoyed working on the management side of veterinary medicine. With over 18 years in the veterinary field, 13 years of experience in management positions, Tania was excited to work at Bay Animal Hospital. Tania loves the sunny California weather and spending time at the beach. She has an adorable chihuahua mix named Lexi who comes to work with her daily. 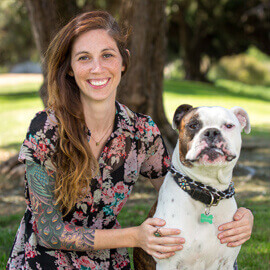 Assistant Manager
Laura has been working at Bay since Sept. 2011. She started off as Pharmacy Technician for 3 years and then became an assistant manager. Her favorite thing about working at Bay is helping animals. Laura has one furry baby, which is an American bulldog named Stella. Laura’s interest outside of Bay is going to the beach, traveling, hiking, camping, and snowboarding with Stella. She’s also from Philadelphia and likes to visit often. 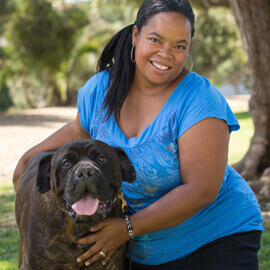 Purchasing Manager
Shanise has been working for BAH since October 2006 and has been a veterinary technician since 1990. She has a Bachelors degree in Animal Science and Management from UC Davis. Her past work experience includes protecting animal actors on movie sets for the “no animals were harmed” credit and working as an animal control officer. She truly loves animals! Her family consists of a loving husband, one daughter and three sons. They have two dogs – Princess Leia and Lando, and a cat named Whiskers. Shanise works hard to ensure that the hospital has the medications, supplies and prescription diets needed to provide excellent care for our patients. 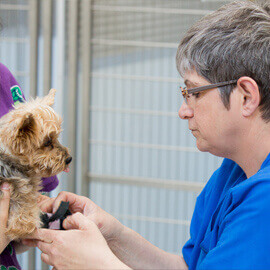 Treatment Technician
Doreya has been with Bay since July 2000. She is responsible for all hourly treatments for our hospitalized and boarding patients. She also volunteers a lot of her time to rescuing lost or abandoned animals and finding them good homes.

Doreya was voted Employee of the Year in 2013 by the BAH team! 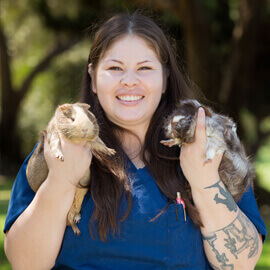 Dental/Surgery/Treatment Technician
Rocio joined the Bay team in September 2014. Her favorite thing about working at Bay is the happy environment and the positive attitude between employees and Doctors. She attended Carrington College and received her A.A. in Animal Science. Rocio has lots of rescue pets that keep her very busy when she’s not here taking great care of our patients. She has 3 cats named Antonio, Bazinga, and Pedro as well as 5 dogs named Chase, Chiquita, Freckles, Kobe, and Mya. Her family also has guinea pigs and a bearded dragon! Before Rocio joined the Bay team she was working at Cottage Pet Animal Hospital and served in the military for 6 years. Her interests outside of Bay are to scrapbook and watch movies with her husband and son. 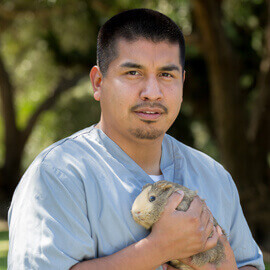 Treatment Technician
Juan has been working at Bay since March 2013. Before joining Bay he worked at The Cat Doctor Hospital. His favorite thing about working at Bay is his coworkers. Juan has 2 guinea pigs named Monkey and Mickey and enjoys playing paintball when he’s not busy helping our patients. 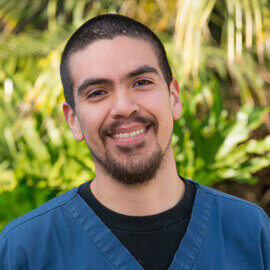 Treatment Technician
Memo joined the Bay team in December 2009. He started out in the kennel department, and quickly became interested in expanding his great patient-care skills in the technician department. When Memo isn’t busy taking care of our many furry patients, he enjoys music and going out with his friends. 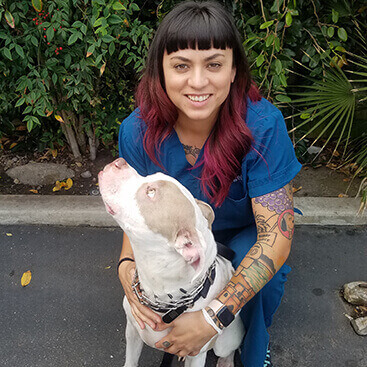 Treatment Technician
Angie joined the Bay team in May 2019. She moved back to the South Bay from Northern California and brings years of experience in the veterinary field with her. Angie is excited to gain more knowledge in surgery as well as getting to know our many adorable patients. In her spare time, Angie likes going to concerts, the gym, hiking, and spending time with her 7 year old pit mix, Milo. 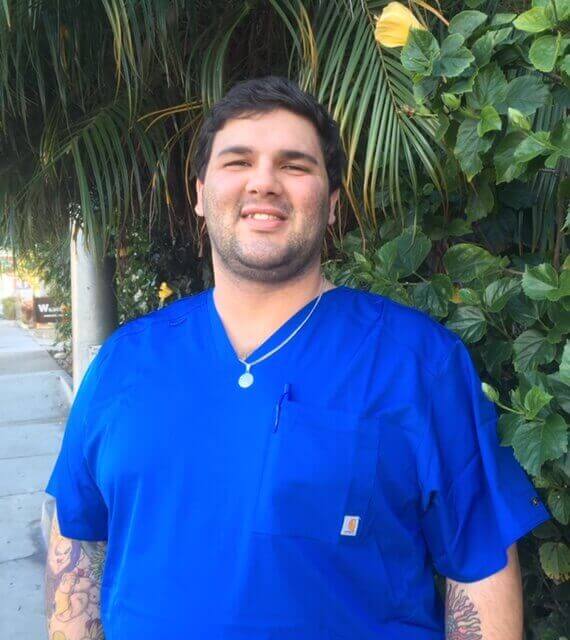 Treatment Technician
Daniel began working at Bay in September 2019. He comes to us with years of experience working with animals at other hospitals in the South Bay. Daniel also worked alongside some of our staff at those hospitals and is excited to be working with them again. In his free time, Daniel enjoys Perler bead art, going to festivals and spending time with his cat, Ginger. 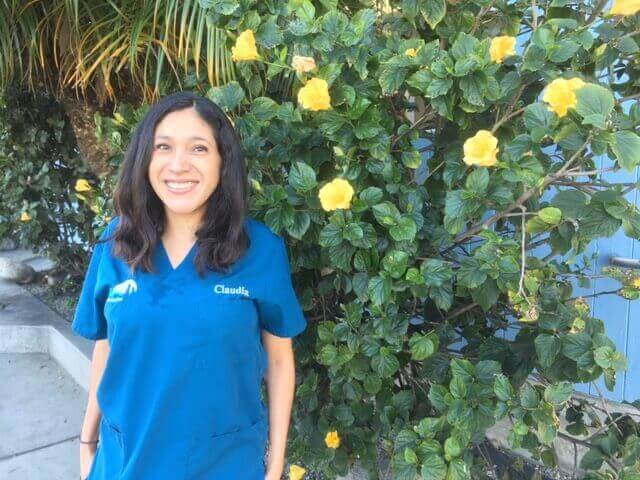 Treatment Technician
Claudia has been with Bay since June of 2019. She comes to us with years of experience in the veterinary field. Claudia spends most of her time helping animals at Wallis Annenberg Petspace in Playa Vista and is well known in the field for her enthusiastic attitude as well as her compassion. Many of us here at Bay have worked with Claudia in the past, and are so happy to have her on the team. When she is not working, Claudia enjoys spending time with her husband and their many pets – 2 dogs named Rock Hudson and Lady Bird, 3 cats named Checco, Daisy, and Bella, a tarantula named Lucy, 3 tree frogs, and 2 geckos named Rugby and Samson. What a crew! 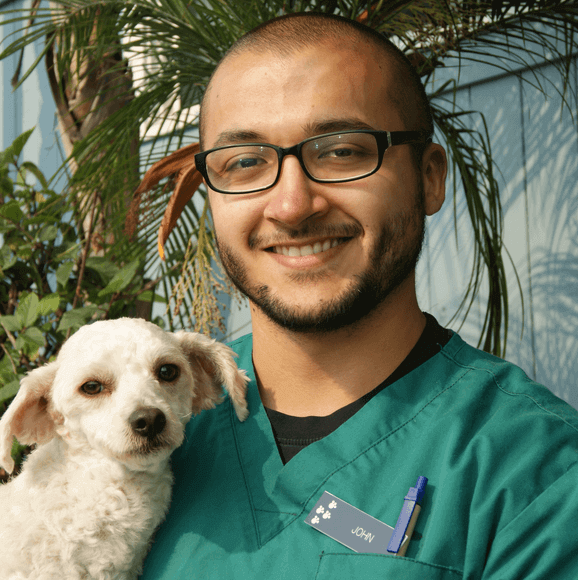 Technician Supervisor
John has been with Bay Animal Hospital since January 2016. He attended Colorado State University and completed the RVT program. He has worked in both animal hospitals and shelters. John enjoys hiking, surfing, drawing, and writing. He has two dogs; Spunky, a Jack Russell, and Ella, a Beagle mix. 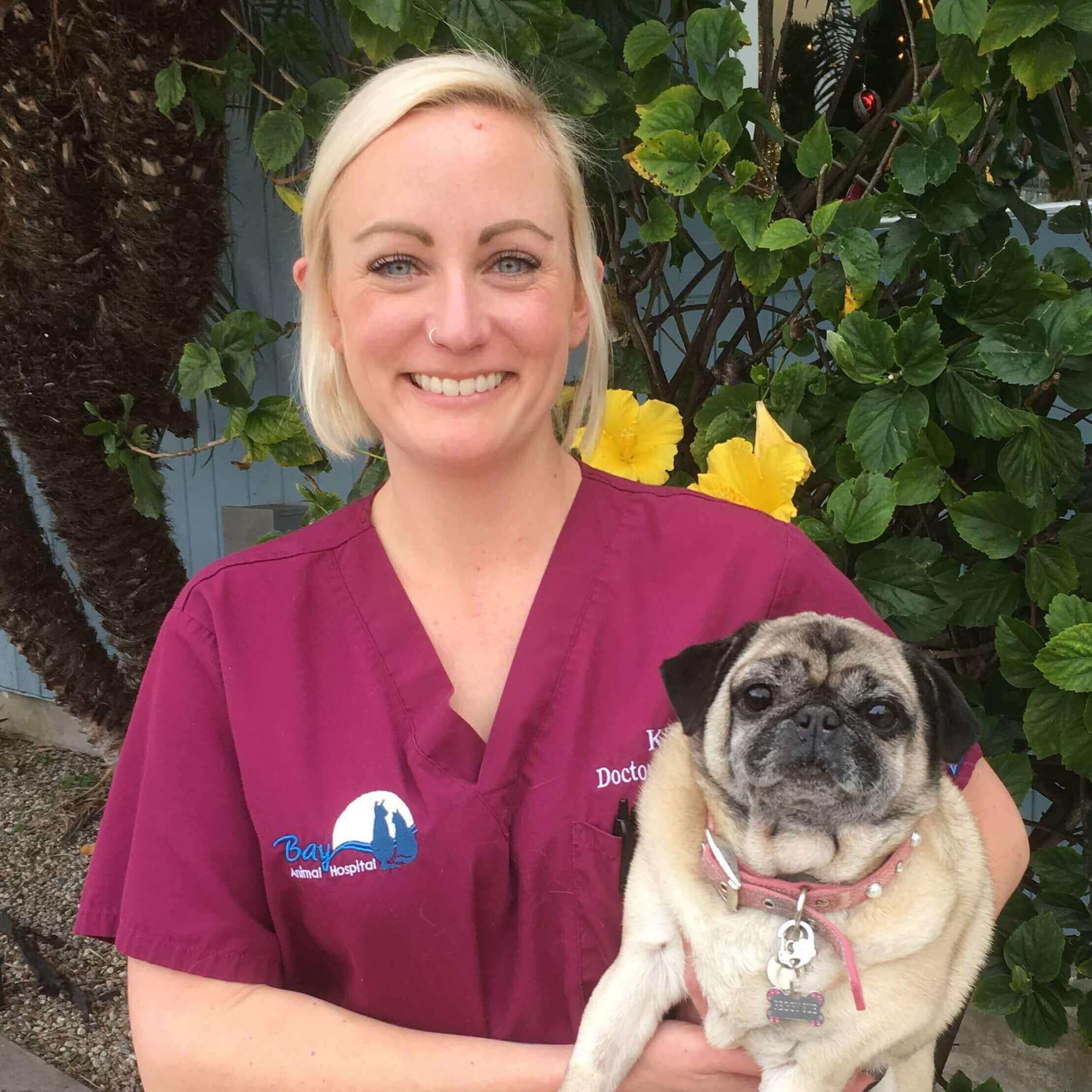 Doctor’s Assistant
Kim joined the Bay team in August 2016 as a Client Care Specialist and quickly transitioned to our Doctor’s Assistant position. She moved back to the South Bay from San Francisco and has been taking care of patients in the veterinary field for many years. In her spare time, Kim enjoys reading, swimming, and listening to music. She also has a little terrier mix named Gidget, and 2 adorable cats – Ribs, and Monster.

Doctor’s Assistant
Sandra began working at Bay Animal Hospital in November 2017. Before coming to the South Bay, Sandra worked at Culver Palms Animal Hospital in Culver City. She enjoys playing soccer and spending time with her son. They have 2 dogs – Rocky and Princess, and 5 cats – Zena, Caramel, Apple, Beetlejuice, and Black Panther. 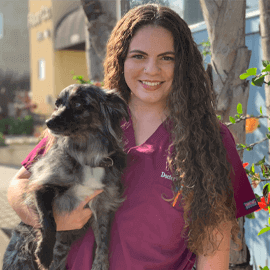 Doctor’s Assistant Supervisor
Sara has been with Bay Animal Hospital since November 2016. She came to us with years of experience in animal and customer care, and quickly became helpful in every department. In Sara’s free time, she enjoys hiking, camping, and spending time with her Australian Shepherd mix, Abbey Road. 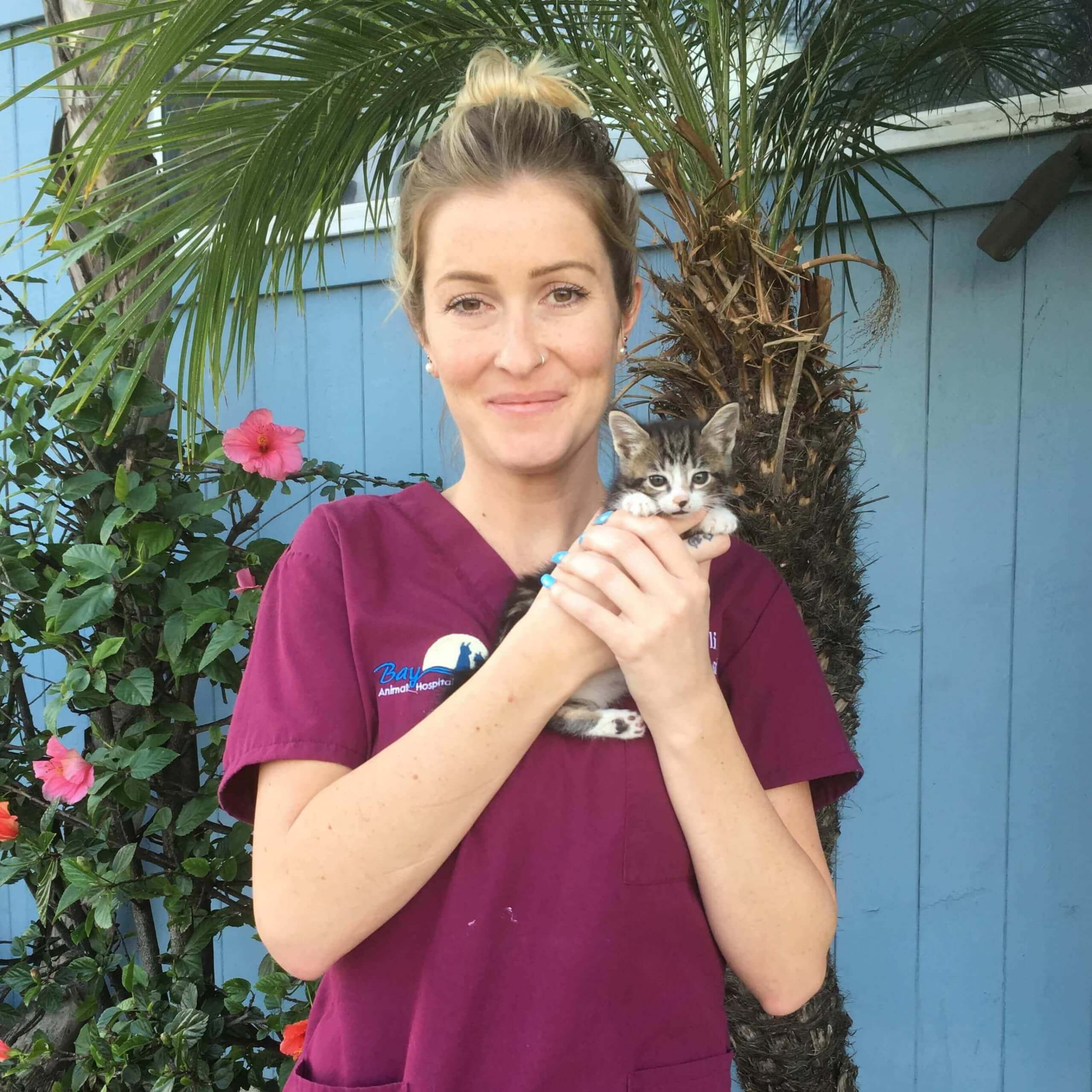 Doctor’s Assistant
Kelli joined the Bay team in May 2017 with years of experience as a doctor’s assistant at Animal Emergency Medical Center in Torrance. Kelli’s favorite place to spend time at is the beach. Her other hobbies include camping, dirtbike riding, rollerskating, and hiking. She also loves spending time with her two dogs Roxi and Sonny, and her cat Boo Radley. 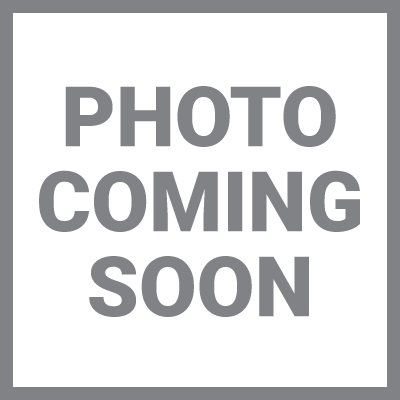 Doctor’s Assistant
Jessica has been with Bay Animal Hospital since August 2019. She comes with years of experience and a huge love of animals. She enjoys working at a hospital where the patient’s always come first. Her favorite things to do when not helping our many patient’s is riding bikes and hanging out with her 2 cats – Roman and Blackie. 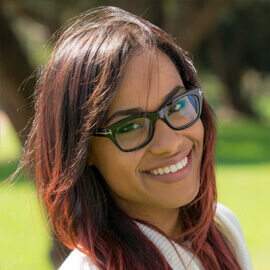 Client Care Specialist
Carmen joined the Bay team in August 2014. Her favorite thing about working at Bay is the excellent patient and client care we give. She owns two pit bulls, which are Chloe and Rokko. Before Carmen joined Bay she worked at Veterinary Cancer Group and Access at City of Angels. Carmen’s interest outside of Bay is to watch movies. She’s also a huge 49er Fan! 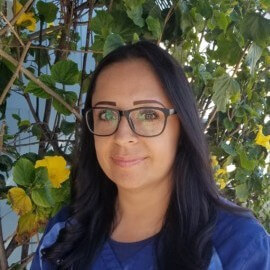 Client Care Specialist
Alma has been with Bay Animal Hospital since August 2015. Alma has extensive experience in the medical field. She worked as a Dental Assistant for 5 years and has been in the Veterinary Field for 8 years. Alma enjoys spending time with her two children, daughter Jezebel and son Santos. She also has three furry family members, “Rex” a min-pin/dachshund mix, “Pooh” a Chihuahua, and Thalia. Alma enjoys working at Bay Animal Hospital with the friendly, hardworking staff. 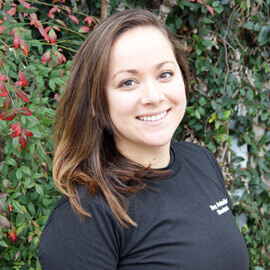 Client Care Specialist
Coreena has been with Bay since October 2015. Coreena worked for California Science Center and studied Marine Biology. She has worked with wildlife and aquatic animals for 5 years. She enjoys spending time with her daughter, Sirena, and being by the ocean. Coreena is a synchronized swimmer and has been enjoying the sport since she was 7 years old! She also has 3 cats; Salem, Mimi and Bobby G. Coreena enjoys working with her coworkers at Bay Animal Hospital because everyone is compassionate and caring and loves working with animals.

Client Care Specialist/Pharmacy Assistant
Jacqueline has been with Bay since February 2016. She comes from a human medicine background, but made the transition to veterinary medicine in 2012. Jacqueline enjoys watching sports, shoe shopping and spending time with her son, MJ. 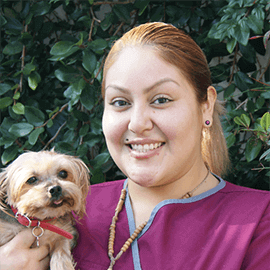 Client Care Specialist
Yamira started with Bay in December 2015. She has worked in personal home care and child care. Yamira enjoys playing volleyball and expressing herself in cosmetology. She has two turtles named Myrtle and Speedy. Yamira enjoys working at Bay Animal Hospital learning new things and working with animals. She is looking forward to expanding her career and become a veterinary technician in the future. 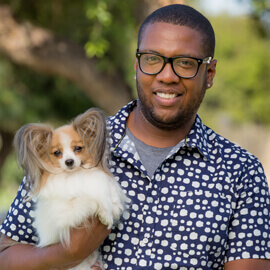 Pharmacy Technician
Marwin started working at Bay early in 2015. Before joining Bay he worked at VCA West LA for 7 years and at California Animal Hospital for 2 years. He also went to Cal State LA for fashion. His favorite thing about working at Bay is continuously learning new things. Marwin’s interest outside of Bay is fashion, traveling, and going to concerts. 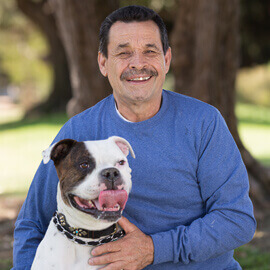 Kennel Staff
Vicente has been with us at Bay Animal Hospital for over 35 years! He loves staying busy and helping all of our clients and patients with a big smile. Vicente also has a lot of family in Guatemala and likes to visit often. 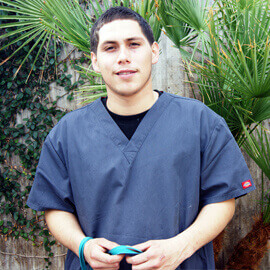 Kennel Supervisor
Eduardo started at Bay Animal Hospital in July 2015. He loves taking care of all of our boarding patients and our resident cats. In his spare time, Eduardo enjoys spending time with his friends and family. He has a little chihuahua named Muneca.

Kennel Attendant
Stephanie has been with Bay since March 2018. She has been working with animals for years and especially loves being around dogs. Stephanie has many hobbies outside of the hospital including painting, reading and stick welding. Her 8 year old terrier, Rex and baby bearded dragon, Ray keep her and her daughter busy while spending time at home. 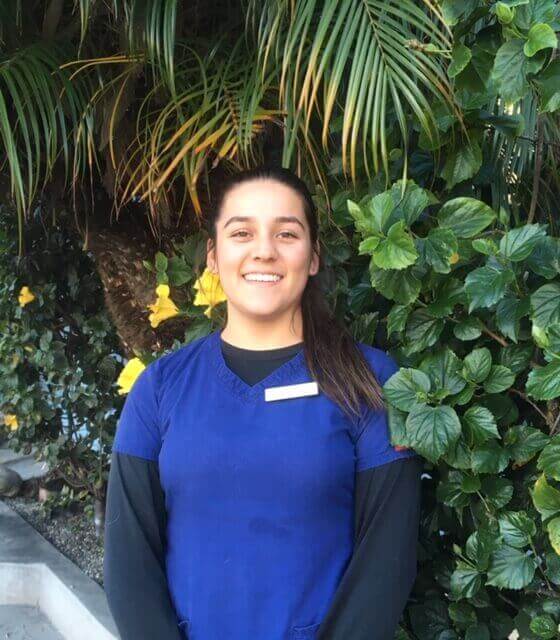 Kennel Attendant
Julie began working at Bay in August 2018. She has a degree in Zoology and is excited to train to become a veterinary technician in the future. Julie loves spending time with her border collie, Bruin, as well as hiking and camping. 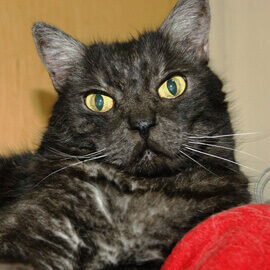 Sid is our second hospital cat resident. He came to us after Ozzy in 2006. Sid was relinquished to us by his previous owner because he liked to eat too many things around the house – in this instance, it was a Barbie doll head! The family was unable to afford his surgery, so we got this lovable goofball. He was also a blood donor and has since retired. He likes to visit us in our treatment area every morning and sleeps with his adoptive brother Ozzy the rest of the day.

*Doctors are not on the premises until 8:00 in the morning